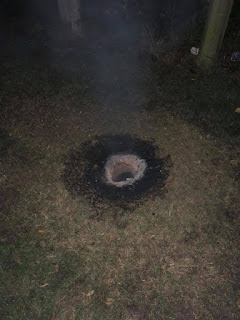 On September 17th, 2018 the quiet little town of Midway, Arkansas was making news.  The local volunteer fire department was called to a residence for a fire.  Not just any fire, but 12 foot flames shooting out of a hole in the ground, about the size of a soccer ball.

Reports of the flames reaching upward of 1700 degrees and fluctuating 8 to 12 feet near a billboard for 45 minutes.

The owner of the property had just recently mowed and there was no hole there prior.

Social Media experts jumped in with analysis immediately, with comments like "I've seen this before its coal burning underground....."  Yeah, no there is now coal here.  UFO laser beams was another,  Methane Gas Pockets,  The Gates of Hell opening.... mini Volcano beginning, and there were reports of a meteor seen over head prior to this incident.

Actual geologists an other scientists are baffled currently stating, there are no fossil fuels in the area to explain.

The gentleman renting the place moved in on the 15th and has been overwhelmed with response to
this Mystery of Midway.

Now not to burst anyone's bubbles but less than a 100 yards from this site is an old Gas Station with old tanks still in the ground.  The old stations used steel tanks that eventually rust and leech into the soil.  I say this because the next town over in Mountain Home had an old station's tanks leach into the ground and the fumes found their way into the Baxter County Jail making inmates sick. 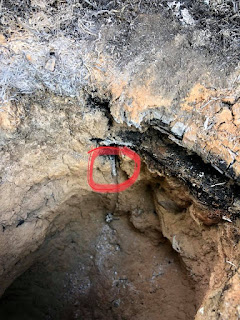 So my hypothesis is its leaked fuel and or fumes in the soil creating a pocket.

I am local to this Mystery and will be conducting some inquiries and samples of the area to see if we can indeed get to the bottom of it.

Email ThisBlogThis!Share to TwitterShare to FacebookShare to Pinterest
Labels: Cover Up, Final Days., Fire From The Sky, Gates of Hell, Hell, Hoax, Meteor, Mystery, UFO, What The Fringe?

New translucent fish at bottom of the ocean has been discovered. 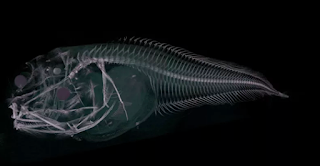 Unnamed fish referred to only by color
Showing just how unknown the ocean remains, three new species of fish have been discovered in the depths of the Pacific Ocean. Forty scientists from 17 different nations went looking deep in the Atacama Trench and came back with snailfish species never seen before.

Right now, they're being named after their colors — pink, blue and purple — but as part of the Liparidae family, they'll be given scientific names soon enough in academic papers.

Looking over 4 1/2 miles below the surface, the scientists found fish that do not adhere to any preconceived notions of what deep-sea fish should look like. They're small, translucent and don't have any scales.

“There is something about the snailfish that allows them to adapt to living very deep," says Thomas Linley, from Newcastle University, who participated in the study. "Beyond the reach of other fish they are free of competitors and predators."

You can watch a video of the fish here.

“As the footage clearly shows, there are lots of invertebrate prey down there and the snailfish are the top predator, they seem to be quite active and look very well-fed," Linley says. 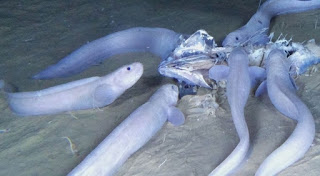 “Their gelatinous structure means they are perfectly adapted to living at extreme pressure, and in fact the hardest structures in their bodies are the bones in their inner ear, which give them balance, and their teeth. Without the extreme pressure and cold to support their bodies, they are extremely fragile and melt rapidly when brought to the surface.”

Finding fish in the Atacama Trench, 3,728 miles long and over 5 miles deep along the coast of Peru and Chile, is no easy task. The team used two landers equipped with HD cameras and traps. These landers were dropped off the side of a boat and left to free-fall to the ocean floor, a process that took around four hours.

Giving the landers 12 to 24 hours to collect samples, the scientists then triggered an acoustic signal to the landers which caused them to release their weights. Floating up to the surface, the landers were able to catch fish specimens and capture video footage of life at the bottom of the ocean.

But even at that depth, the fish still face human interference in their lives (beyond the scientific study). The snailfish diet includes amphipods, tiny crustaceans that are known to hold microplastics. Microplastics are tiny pieces of plastics that scientists have shown are infiltrating every level of the ocean.

“They would not be spared any impact we have on a global scale,” Linley tells Earther.

Posted by ParaPalooza at 14:14 No comments: