If you like the odd, the strange and unexplained then this Documentary is the film for you.  Invasion of Chestnut Ridge, the 5th in the series of films by Seth Breedlove and the Small Town Monster Production team will keep you glued from the opening graphics to the end credits, and if you were a backer on Kickstarter then you get to see your name in the credits as well. 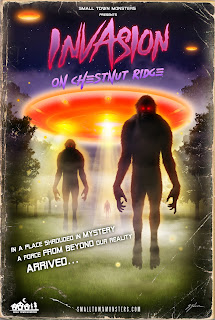 Seth’s storytelling keeps evolving as well as the talents of his crew in cinematography, special effects and animation to the scoring of music, and voice over work.  Each film he produces you can see his passion for retelling lost and forgotten stories that are regional at best in their lore.

This film covers UFO’s from Keksburg, to cryptids along the ridge in rural Pennsylvania, with detailed research and eye witness interviews in their own words.

You can’t help but love Small Town Monsters approach to storytelling.  And even though I’m a backer of this and the Mothman film, I will be purchasing a physical copy to include into my collection.

I’ve met Seth in Fouke, Arkansas while I was also in the area filming and he is truly a down to earth guy with big dreams that he is chasing down and making happen.  Proof that if you love your job, good things will come with hard work….

Kudos on another inspiring film to the entire STM Crew!

Pick up  your copy today. https://shop.smalltownmonsters.com/ 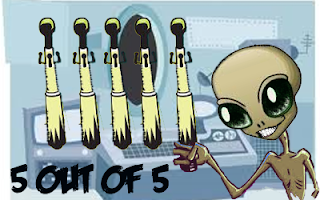 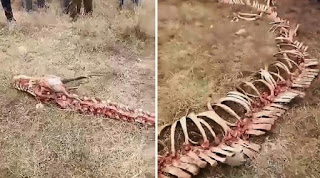 One of the oldest legends around is the majestic dragon. There are many stories that speak of these legendary beasts and how terrifying and powerful they were. From  Europe to China, Russian to Greek mythology.

Dragons are usually shown in modern times with a body like a huge lizard, or a snake with two pairs of lizard-type legs, and able to emit fire from their mouths. The European dragon has bat-like wings growing from its back. A dragon-like creature with wings but only a single pair of legs is known as a wyvern.

The terrible creatures are keepers of treasure in Western cultures and often considered evil and fearsome.  But in other cultures, dragons are more serpent-like and are considered sacred beasts.

Eastern dragons are divine and considered a good omen. There are people who have reported seeing dragons, and recently the skeletal remains of such beast have been found in China.

A 60ft long dragon skeleton was discovered in Zhangjiakou City, China, and people believe it's the real deal.

The skull has horns; the long spine has a pair of arms and legs.

Could this be the remains of a real dragon?


Probably just a large collection of bones linked together for the appearance of it being a 60ft Dragon.

Posted by ParaPalooza at 13:28 No comments: