As always I am out seeking evidence of unknown animals, namely Cryptids.  Most reports are from over active imaginations, faux stories to drum up attention, and then there are those that the witness truly believes what they saw is in fact a Cryptid.  In this particular case the original story circulating hinting that it was indeed a hunched over Bigfoot.

Now as much as I want something to be true, I generally do not jump on a story just to get the traffic to the website.  I start digging, researching, and keeping an open mind.  I am an avid outdoorsman, hunter, fisher and hiker as well as a Legend Hunter.  I know my surroundings, the local wildlife, sounds and thus don't get spooked like some do.  Some researchers only read online then go out in the woods once or twice a month for a few hours, or a couple of times a year.  So some, not all get a tad over excited in claims of activity...... I've been out with several that claim the MoneyMaker idiology... it must be a Sasquatch. 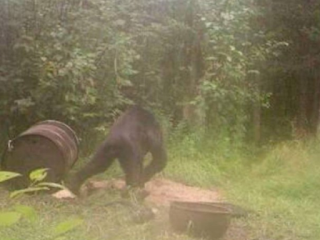 That being said this particular story caught my eye, as it shows an unusual photo from a game cam in the Upper Peninsula of Michigan.  It has the coloring of a bear, the size of a bear in relation to the 55 gal drum, the industry standard of a drum is 22-1/2 inches diameter X 33-1/2" inches long.  And the responses from so many forums and Facebook pages tickled me.  So many arguing for and against what it is supposed to be and their supporting arguments.  In this field of research scientific methodology over rules wants and wishes.  If your claims can not stand to the scientific method than the entire claim is ruled null and void. 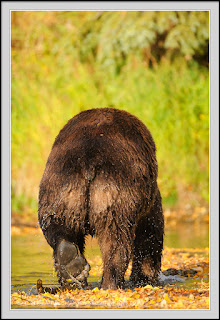 Now I stated on several pages publicly it was a bear..... its very apparent to me... I have a mother bear and cubs within a mile of my house.  I know the movements, the looks. and for Pete's sake why would a 8 foot tall or taller Hominid be all hunched over running and look so small?


Simple walking bear here versus one running or changing directions because it was scared off. 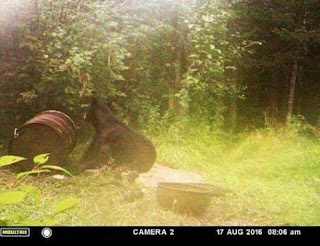 Well another photo has appeared from the same game camera with a delay of 13 minutes, showing this bear here.  Now some argue due to the time difference Bigfoot could have left and a bear could have wondered in............... Occam's Razor folks. "a scientific and philosophic rule that entities should not be multiplied unnecessarily which is interpreted as requiring that the simplest of competing theories be preferred to the more complex or that explanations of unknown phenomena be sought first in terms of known quantities" 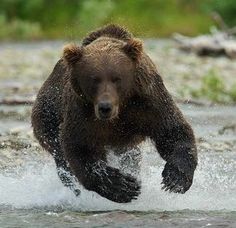 Now its been pointed out to me, well look at its leg, the angle the arc of the back.  Has noone seen a bear run?


I'm submitting a few photos for observance and discussion.  Bears in various states of run, changing of direction, sizes. 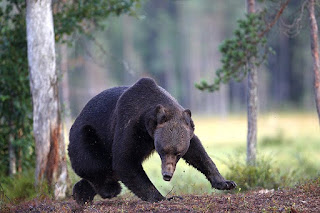 I'm sorry to shoot down the theory of its a Bigfoot, but i'm here for observation, not blind followings leading the blind.


I apply this same technique in Haunting's and UFO research.  The general public already look at us as freaks, and kook's why would we add to that ridicule. 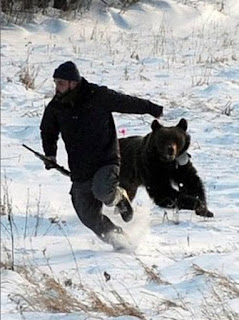 This is what happens when you get to close to a bear and her cubs.  One particular after noon here in Arkansas my wife (at the time) and oldest daughter (4 at the time) rode the 4 wheeler down the hill from our house... right then a bear ran between them and me and into the woods... in the direction they were going on the 4 wheeler.  I ran full sprint into the woods and cleared the fence with ease (now at this age.... would never happen).  When i landed on the other side i heard the bear,...... then i heard the cub.  I immediately crawled slowly back over the fence.  One thing you never ever do, it doesn't matter how cute they are if you see a cub..... never ever get between a momma bear and her cubs.  EVER!!

Posted by ParaPalooza at 13:41 No comments: 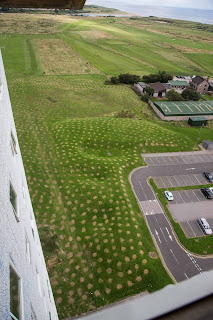 I love a good Crop Circle Story,  don't know what it is about crops being laid down in patterns that gets to me.  I mean yes, the alien angle is cool... and yes i know anyone with a rope and some boards can run out and make one.....

Aberdeen residents have been left wondering if they had been visited by aliens after waking up to find mysterious markings on a nearby grass land.

The tenants of the tower blocks in the Seaton area were left scratching their heads in at the crop-circle-style imprints in the grass.

Some even speculated on social media that the Granite City had been visited by beings from another planet.

And one person suggested that the bizarre branding looked like something from classic 1970's arcade game Space Invaders.

Another said the imprints were likely left by little green men.

Others said it could have been a gaffe-strewn midnight golf outing, with players digging up the pitch with divots.

However the council has come forward to say it is behind the circles.

An Aberdeen City Council spokeswoman said: “The marks are not alien crop circles.

“They are preparatory work for planting trees as part of the £500,000 Seaton Backies project which is rejuvenating a neglected green space for family use.

“We are planting dozens of trees as part of the project to create shelter, and the spots where the trees are to be planted need to be free of weeds before then – the trees will be planted from late autumn to April.” 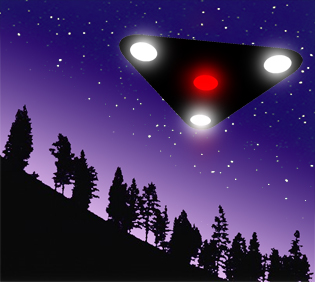 Recently received video, multiple videos of Illuminated Orbs in the Sky in a Perfect Equilateral Triangle Formation moving in unison.

I'm mobile and reviewing the video on my phone.

I will upload this with an UPDATED story ASAP.  I wish to analyze the video, and enhance it as the
photo is very dark (ie. night sky) and then show before and after clips to get your viewpoints.


Its from a Cell phone so fingers crossed we have imaging to analyze.


Inspired by The Monsters In America Map by Hog Island Press, is a unique Art Exhibit that is a must see. 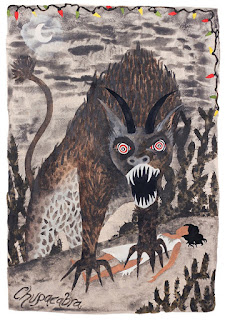 Every Saturday in September you need to swing bye the One Mile Gallery in Kingston, New York and catch a glimpse of some of America's Most Influential Legends in art.  It was inspired by the Map by Hog Island Press put out called Monsters In America.  58 artists submitted well known legends like Mothman, Champ, Swamp Monsters, and Even Bigfoot along with many more cryptozoological creatures done in various mediums like pen and ink, oils, pastels and many other techniques to capture your eye.

You can see all the art from the exhibition over that the Monsters In America blog  right here. 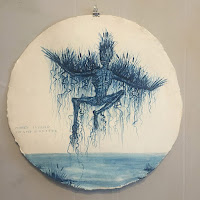 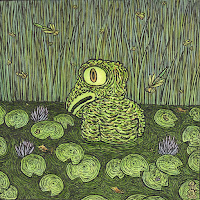 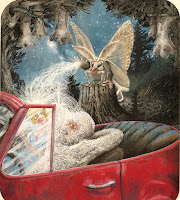 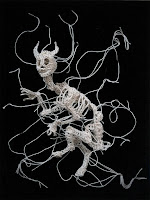 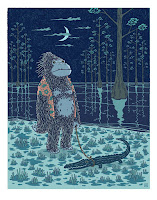 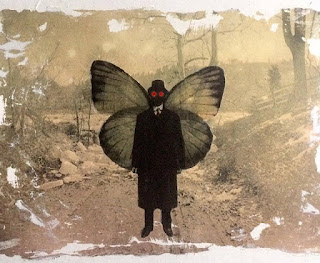