Alligators in the Sewers!! Not a Myth or Legend After all.

A Florida man says he felt the Earth shake when he went to check his mailbox. That's when he discovered an alligator was living in the drain system.
If you're missing a green ball don't come looking for it in the drain pipe. 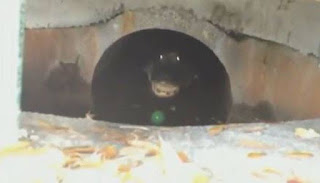 "It was pretty loud, it definitely got my attention," said Apopka resident Louis Camacho. An 8-foot alligator snuck up on Camacho when he came out to get the mail. "I could hear him and feel him. I could feel it under my feet, the vibration," he said.
He was practically standing on top of the gator. “I moved over and looked down, thinking it was some type of earthquake, but it wasn't. Then I felt the vibration again," he said. It was a vibration created by a mighty hiss, with a purpose. "I guess to warn me, to back off,” he said.
Wildlife officials say a full size alligator this big can be very dangerous, especially when it feels cornered. Crews say they've seen gators in gutters, but it's not common. They also say you should call something like the encounter in to officials.
They said trappers would likely remove the gator because it’s in a neighborhood with children and pets. Camacho says he wasn't worried about it because he's seen it before around a retention pond behind his house.
He was more nervous a few days ago when a 300 pounder showed up in the same spot. “I hear a little noise. I turn around, and I see a bear," he said. Who needs a zoo when you have bears and gators in your backyard?
"Honestly, I love it. I respect nature, you know, and I give it its space and they've given me my space," he said.

Email ThisBlogThis!Share to TwitterShare to FacebookShare to Pinterest
Labels: Alligator, Cryptids, Monster, Sewers, What The Fringe?