Worm with eyes in head and bottom found off Shetland Islands 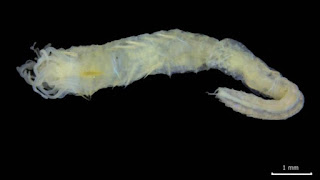 A new species of worm which has eyes in its head and also in its bottom has been discovered in the sea off Scotland.
Scientists found the animal during a survey of the West Shetland Shelf Marine Protected Area.
Measuring only 4mm (0.2in) in length, it was discovered in a previously unexplored part of the seabed of the large protected area.
The worm has been given the scientific name Ampharete oculicirrata. 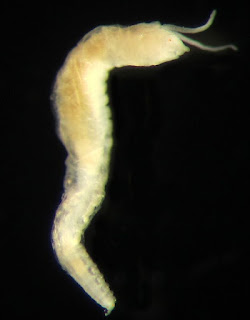 The Joint Nature Conservation Committee (JNCC), Marine Scotland Science and Thomson Environmental Consultants carried out the survey.
The worm collected during the survey is now in the collections of National Museums Scotland in Edinburgh.
Jessica Taylor, of JNCC, said: "The fact that it was found in relatively shallow depths, relatively close to the Scottish coastline, shows just how much more there is to understand about the creatures that live in our waters."
"I'm excited about future JNCC and Marine Scotland surveys and what they may reveal. And it's great that specimens of the new species have been acquired by National Museums Scotland and are available for future studies."
Courtesy BBC News
Posted by ParaPalooza at 14:37