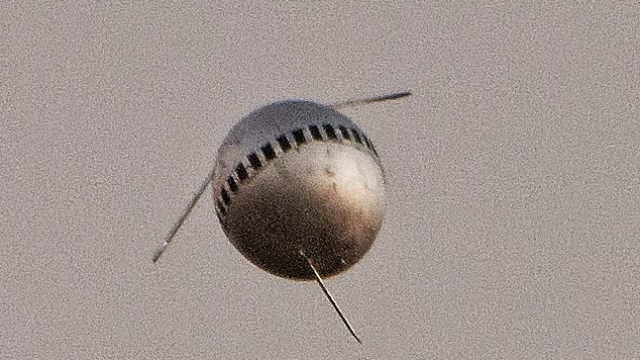 A fascinating craft hovering in broad daylight over the California skies was photographed and submitted to MUFON along with detailed witness testimony:

The eyewitness was coming home and pulled into his driveway. Above and beyond his neighbors home he noticed a bright orb hovering. It reflected the sunset orange, and that is what caught his eye. despite being a completely clear blue sky. At first he thought it could be a balloon or some sort of odd looking helicopter or drone, but it didn’t have any rotors. It appeared to have rods or antenna coming out of it Kind of resembling some older Russian Satellites like Sputnik.

He went to into his backyard to get a better vantage point. It appeared to be less than a mile away over residences. Over a 5 minute period he grabbed his camera, then went back for his tripod for a better quality photo.

Later grabbing his video camera and began to shoot video for about 20 min. Over the approx 45 Minute that it lingered, there was some wavering like it was being affected by air movement. At times it would descend behind a large tree, then reappear slowly as it came out from behind the tree.

The object remained relatively stable then started to slowly drift away to the SW until it couldn’t be seen anymore due to darkness.

UFO?, or a really interesting balloon to generate stories just like this one?  It really does resemble Sputnik.