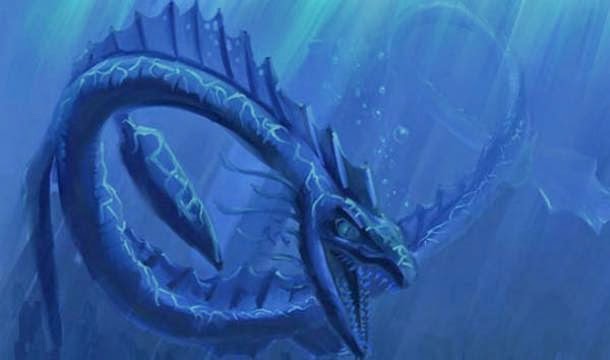 You read that title correctly.  The Government has announced a supposed mythical creature, a legend that has stood the test of time, in fact does indeed exist.

Ok so its not the U.S. government telling the truth for once.. {like they ever have}

However if you jet up North to Iceland, there you will get the facts.   So just what are the facts you ask?

The Icelandic government carried out an investigation by the Fljotsdalsherao municipal council and  has ruled that a legendary sea serpent named Lagarfljotsormurinn {Seriously I could barely type that name.......how the hell am I supposed to pronounce it}, which is rumoured to inhabit Lake Lagarfljot, actually exists.  The commission has ruled that a 2012 video of what is claimed to be Iceland’s most famous lake monster is indeed authentic.

The Lagarfljótsormur, or ‘Lagarfljót worm’ is an Icelandic lake cryptid which is purported to live in Lagarfljót, a freshwater, glacial-fed lake in Egilsstaðir. The earliest recorded sightings of the Lagarfljótsormur date back to the Icelandic Annals of 1345, and have continued into the 21st century.

However, sightings increased exponentially after a home video shot in 2012 went viral. The home video shows what looks like a long, serpentine form swimming in the glacial lake in eastern Iceland.

{Oh look we found the video.  Lets take a peak shall we.}

Well anyway the Lagarfljótsormur {seriously my fingers cramp every time I type that name} is typically described as being 90 metres in length {that's 295 friggin feet people!}with many humps, and has also been reported outside the water, lying coiled up or slithering into the trees. In ancient times, sightings were considered to precede a great event such as a natural disaster. {Mothman anyone}

In 1963, the head of the Icelandic National Forest Service, Sigurður Blöndal, reported seeing the giant worm, and in 1998 a teacher and students at Hallormsstaðir School also claimed to have witnessed the legendary creature.

In February 2012, the Icelandic national broadcaster, RÚV, published the home video thought to show the Lagarfljót Worm, however, skeptics claimed that the video simply depicts an inanimate object moved by the rapid current.  Undeterred by skeptical explanations, the Fljótsdalshérað municipal council established a 13-person ‘truth commission’ to determine whether the video shot by Hjörtur E. Kjerúlf was authentic. {we're not sold on this video..... to many variables at play}

The inquiry has just completed its investigation, and has determined that the video is authentic and recommends further investigation and research into the Lagarfljótsormur.
{Someone call our Travel Agent.....I'm serious I have Creature Miles to Cash in Damnit}The commission may have also been somewhat ‘motivated’ by the burst of tourism caused by the 2012 video.  A sightseeing boat named Lagarfljótsormurinn, which operates on the lake, seeks to preserve the traditions of the Lagarfljót Worm for cultural and tourism purposes. {Most locations tied to a legend or haunting do the same thing.... all in good fun, and business sense}

If the video is authentic, and actually depicts a living creature, it may not be as monstrous as the legends say. Many species of fish have been found which resemble ‘sea monsters’ described in mythological tales, for example, the frilled shark (Chlamydoselachus anguineus), and the giant oarfish (Regalecus glesne). It might just be that a similar species may inhabit Lake Lagarfljot, leading to the development of legendary tales over the centuries.