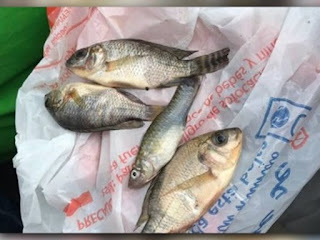 MEXICO CITY (AP) - Civil defense officials in northeast Mexico say a light rain was accompanied by small fish that fell from the sky.Tamaulipas civil defense says in a brief statement that rain Tuesday in the coastal city of Tampico included fish. Photos posted on the agency's Facebook page show four small fish in a bag and another on a sidewalk.


According the U.S. Library of Congress, it's a phenomenon that has been reported since ancient times. Scientists believe that tornadoes over water - known as waterspouts - could be responsible for sucking fish into the air where they are blown around until being released to the ground.
Source: Associated Press
Article is by Jason Mansfield: Anomalous Environmental Studies Analyst™ found at www.hauntedarkansas.net, Voice Over Artist, Film Maker/ Prop Designer/   Creative Consultant/ Concept Artist at Binary Entertainment www.binaryentertainment.com, Folklorist, Horror Enthusiast, Writer, Squatchologist™, Legend Hunter & Oddity Tripper™ #BlogOfOdd #WhatTheFringe #OddityTrippers

Email ThisBlogThis!Share to TwitterShare to FacebookShare to Pinterest
Labels: raining fish, What The Fringe?