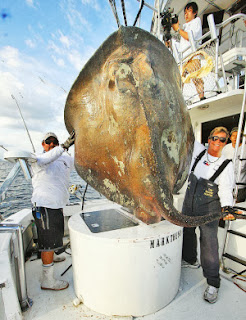 A rarely seen sea creature that normally lives at the depths of the ocean has been snagged by Captain Mark Quartiano, better known as Mark the Shark.

The odd-looking creature was caught off Miami Beach. According to Quarantino, who posted the photograph in his Instagram account over the weekend, the huge beast is a Dactylobatus clarkii or Hookskate.
Mark the Shark told CBSMiami.com that he caught the monster in local waters while shooting a series of shows for a Japanese television network.
The beast was captured, tagged and released back into the ocean.
Very little is known about the Hookskate. It mostly inhabits muddy bottoms of the continental slope at depths of 1,000 feet in the western central and southwest Atlantic