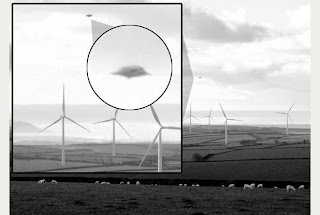 An Unidentified Flying Object has been spotted above the countryside in North Devon.
Photographer Rob Tibbles was looking at photographs he had taken on Saturday at Fullabrook wind farm, when he spotted a strange object hovering above one of the turbines.
After zooming in on the object to have a closer look, it was still unclear what it could be.
The object appears to be grey in colour, quite large and of an oval shape.
Chivenor search and rescue said they had not had any reported UFO sightings in the area, however, they were on a training exercise this morning so said it could have been them.

Email ThisBlogThis!Share to TwitterShare to FacebookShare to Pinterest
Labels: UFO