Bob Lazar, you've heard the name.  Well you have if you're into UFO's and Area 51.  Well its now the 25th anniversary of when he first made public what was going on at S4 in Area 51... 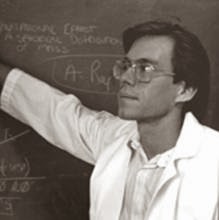 Lazar claimed to have worked in 1988 and 1989 as a physicist in S4 allegedly located at Papoose Lake southwest of top secret Area 51 near Groom Dry Lake, Nevada. According to Lazar, S4 serves as a hidden military location for the study and research of extraterrestrial spacecraft, or flying saucers using reverse engineering. Lazar claims he saw nine different extraterrestrial vehicles there and has provided detailed information on the mode of propulsion and other technical details of a disc-shaped vehicle he called the sport model.

He also claims to have been working on the fuel, an element with an atomic weight of 115 which allowed the space crafts to warp space and essentially pull the desired destination to the ship. This method of travel allegedly enabled alien travelers to cross vast distances with minimal three dimensional movement. Element 115 was first discovered in 2003 and first synthesized in 2013.


Lazar first appeared in the media in an Omni magazine article in the early 1980s. He also appeared on television on a local Las Vegas news program discussing his experience at S4 and Area 51. He was also featured in the Los Alamos Monitor in a story dealing with a jet car he claimed to have built with help from a NASA researcher. The car was built from a jet engine modified and placed on an existing car model.

For the Record......... I believe the man is the genuine real deal.  His consistency in his statements, his knowledge level, his humbleness in not capitalizing on the topic like so many do.  This author operates in much the same manner.  I have knowledge others do not, I find many researchers comical in their methods and Seeking fame on no proof.   I on the other hand, lay low, research, share a few concepts with people (and some have run off and included in their own books as their own original thinking).  I would love to sit down ON or OFF the record, just to talk with Mr. Lazar... and if he doesn't wanted it printed, then I won't.