﻿
Swedish twins Ursula and Sabina Eriksson had no history of mental illness and lived normal, happy lives with their respective families. Ursula traveled from the U.S. to Ireland to visit her sister ... and what followed was a spree of violence and shared madness that resulted in several traffic accidents, one murder victim, and a whole bunch of baffled cops.
Sabina and Ursula were in Ireland when, for unknown reasons, they hopped on a bus to London without telling anyone. The twins were apparently behaving very strangely, and so odd that the driver kicked them out in the middle of the highway and told them to walk it off. They did just that: They started walking in the middle of the highway, not caring about the speeding cars.
At this point they ran into a group of officers who were being filmed for a COPS-like show for the BBC. The cameras captured every insane moment that came after that -- the video that follows at times looks staged as hell, but it isn't. There's a real murder conviction to prove it. That's just how British people talk.
As seen in the video, the twins were detained by the cops and appeared calm, until Ursula sprinted onto the highway and ran directly into the wheels of a truck. 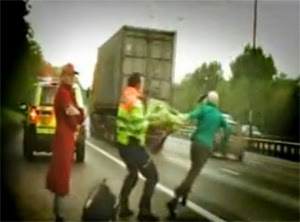 The cops hadn't even had time to react when, seconds later, Sabina did the same thing and was struck by a car. 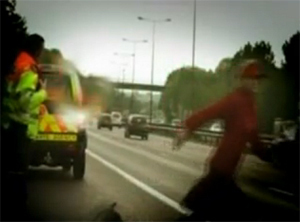 That wasn't the end of it. Despite being just struck by a care, Sabina got up and attacked the officers -- it took six people to contain her. Ursula was raging too and probably would have done the same thing if, you know, her legs hadn't been broken and stuff. 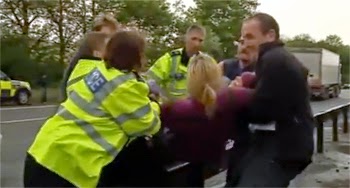 Afterward, Sabina calmed down and was behaving so normally that the cops released her the next day. This proved to be a huge mistake: Hours later, she murdered a man who offered her a place to stay and then launched herself from a 40-foot bridge. She survived, somehow, and was sentenced to five years in prison. Why only five years? Because lawyers had no trouble proving that she was crazy!
But, if Sabina was the crazy one, why did Ursula jump onto the highway, too? Neither of them had traces of drugs or alcohol in their bodies.

According to psychologists, one of the twins suffered from a form of temporary insanity, and the other was "infected" by her twin's madness -- their bond was so strong that when one lost her mind, the other did, too.
Article is by Jason Mansfield: Anomalous Environmental Studies Analyst™ with Paranormal Studies of Arkansas found at www.hauntedarkansas.net, Voice Over Artist, Film maker at Binary Entertainment www.binaryentertainment.com, Folklorist, Horror Enthusiast, Writer, Squatchologist™ & Legend Hunter
Posted by ParaPalooza at 11:33

Email ThisBlogThis!Share to TwitterShare to FacebookShare to Pinterest
Labels: Bizarre, Demonic, Insanity, Murder, What The Fringe?