Six bizarre Ewok-like creatures seen chilling near a cave off the Krabi coast in a video that went viral over the weekend are, sadly, not a new anthropological discovery. Turns out it was all just a bit of performance art for the Thailand Biennale, a national art festival.

The clip, captured by American tourist Jemayel Khawaja on Friday, shows the furry creatures sitting or wading around in the water to the sounds of Thai clarinet as perplexed foreigners on kayaks and a tour boat watch on. 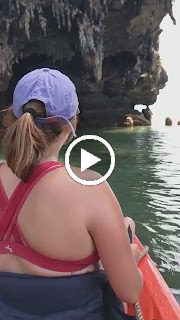 “So we were kayaking around Railay Bay in Thailand, turned a corner towards a cave, and found ourselves confronted with perhaps the most surreal and bizarre situation I’ve ever experienced — Ewok-like troll creatures engaged in some cacophonic ritual in the water. It went on for like 30 minutes! WTF is going on here?” Khawaja wrote.

Well, as pointed out by a commenter, one of the creatures may actually have been playing the clarinet.

While most (including us) were simply confused by the performance, plenty of commenters were positive in their assessment.

So what was it exactly? According to one Facebook commenter, the performance was the brainchild of Norwegian artist Tori Wrånes, who’s known for creating “rituals and drealike constellations,” according to her website. 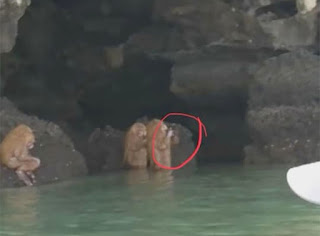 “Wrånes has been occupied with developing her own Troll-technique; an improvised, non-verbal, language based on rhythm and temperament,” the profile says.

A quick look at Thailand Biennale’s Facebook page confirmed that an installation featuring the imaginary Krabi-born creatures was set to debut on Friday. 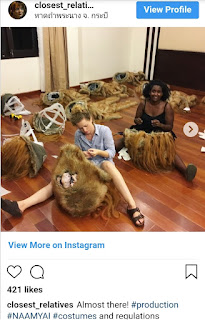 “Struck by the dramatic landscape of Phra Nang Cave and beach during her site visit, [the installation] imagines the presence of indigenous ‘Krabi creatures’ to interpose in daily life that occurs within this tourist destination,” the description reads. Alrighty then! 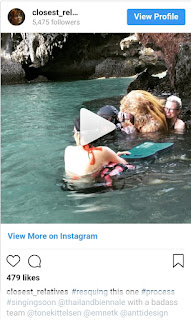 If you want to check out our new friendly, furry friends for yourself, good news. They will be appearing daily at the Phra Nang Cave throughout the entire four-month biennale, until Feb. 28. The clarinet concert, however, was apparently a one time thing.

A copy and paste from Coconut.co