Most outdoor adventures of fishermen result in photos of them proving they got the big one! Living in the area that I do in the world surrounded by 2 huge lakes and 3 different river sources, not counting the creeks and streams. I see my share of photos, ranging in a nice catch, to huge brown bears from trail cams, to the Big kill during deer season. 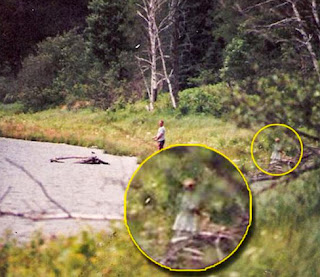 This photo here however, is perplexing.

In the early 1990's while out on a hike that involved some serious trekking through brush and weeds, a couple, Dorothy Dunn, and Elizabeth Tolomeo came out of the woods and to a remote lake while on their backwoods hike in Wisconsin.

Remote was an understatement, no roads, no boat ramps, no houses, very much isolated from the world and the chaos of people. The perfect spot for some relaxation, and some fishing. Elizabeth decided to capture some photos for the day on their camera, not looking for anything, just simple candid shots of them enjoying the day.

It wasn't until the film was developed at a later time that Elizabeth noticed something a tad bizarre in one of the photos. It appears to be a girl, in period clothing. Possibly wearing a pinafore and bonnet.

The area was a busy logging area back in the day. The plague hit and many children did pass during this time. Star Lake Cemetery has graves of many of the area kids that succumbed to the sickness.

It is suspected that this may be the captured image of a child spirit, or possibly a Native American Child Spirit. One thing they are very adamant about........ It was just the two of them there, no one else was around when the image was taken.

Email ThisBlogThis!Share to TwitterShare to FacebookShare to Pinterest
Labels: Apparition, Bizarre, Ghosts, What The Fringe?, Wisconsin